The night of 31st October, 2014- a woman student was raped in Basheer men’s hostel at EFLU, Hyderabad. While EFLU may not have been the most gender-just place on earth, the community had always been vocal regarding gender matters and against gender assault .This horrific assault again brought back the realisation of exactly how unfair is the society we live in, and also the fact that the university is after all a reflection of the world outside our gated community. This post is to tell you about the ways in which EFLU community has tried to to cope with the event, and the repressive mechanisms employed by the administration that

The EFLU community reacted, responded in various ways. While the accused were arrested and judicial processes started, on 2nd November, 2014, the students of the university took out a march and a demonstration condemning the rape, expressing their solidarity with the complainant and demanding justice for her. Alongside, they also deplored segregationist policies of the current administration, which, instead of raising awareness regarding gender, choose to stop free expression, and regulate movement.  The students demanded immediate reconstitution of the GSCASH with elected student representatives, an internal complaints committee to look into the incident of rape, an end to moral policing and policing of the campus, and end to segregation.

This is an image from 2nd October night, with the EFLU students inside the gate, protesting alongside their compatriots from other universities, who were not allowed entry. `
The next day 3rd of November, representatives from students gave their demands to the Vice Chancellor and also asked for an open meeting with her. The VC did meet the students, but along with a high ranking police officer, who assured them:
"All the boys in the boy’s hostel are potential rapists, we must save the girls from them and I have every right to barge into your hostel rooms whenever I need to".

Police forcibly removed students from in front of the VC’s car and that was the end to attempted dialogue. The newspaper reports also quoted the VC as saying:
"We have already banned the entry of boys into the girls' hostel. In future we will restrict girls’ from the boys’ hostel. Guards and cameras are already in place." This statement and the banning of women students from the men's hostel is in clear violation of the Saksham guidelines which states "Campus safety policies should not result in securitization, over-monitoring or policing or curtailing the freedom of movement, specially for women."

The above statement by the VC and subsequent actions by the administration violates every law, rule, guideline and constitutional guarantee that makes us independent free individuals and students.

In the mean time, women’s groups and activist groups gathered outside the gates, they requested an audience with the VC, they wanted to show their support and solidarity with the students and the survivor, but were not allowed entry. Even the Women Rights Commissioner was made to wait outside. Again, no newspaper coverage, except the statement by a right wing political leader mourning the "lack of Indian culture" in EFLU.
As the administration continued with deploying more and more policemen, and security guards to "protect" the students, promised more CCTV cameras- the community tried to react and build gender sensitivity on campus in innovative ways. On Tuesday, 4th November students organised poster painting campaign on campus, seeking to sensitize themselves and the administration, while they are at it, about the importance of bringing gender to the fore. The strung the posters around a lawn which they did not have access to, hoping that at least random people passing by will take a look. The posters however are not there anymore. A week later, the administration employed the caretaker to take them off, with the fear that it will “incite students to violence”.
Other events followed. A group of students took to cross-dressing, to question gender binaries and segregation. On Sunday, 9th November, students organised a workshop on legal recourse in the face of sexual violence.
All through, the local media was rife with victim blaming, the campus was locked down, no one without a university ID card was allowed to enter (except the police of course) and the English language media published biased news articles.
This statement by Democratic Women’s Movement EFLU criticizes the culture of victim blaming. While residents of Basheer Men’s Hostel uniformly condemned the sexual assault and made pleas for a more inclusive campus, the Hindu published fabricated news about how men on campus do not want women to enter their hostels. First, this movement is not about hostel entry. Inability to enter each others hostels is just a symptom of a greater malaise: the gender unfair campus that this administration seems determined to build.
The women’s hostels, the alumni (click here to read the statement) and the Teachers’ Association also issued public statements- asking for sensitisation and a restoration of democracy on campus.
The administration responded with further repression:

Incitement to violence was the stated reason behind “banning” the street play “Kissa Kursi Ka”, held on Monday 10th November. A political satire on the contemporary situation in the country and in the university, taking up the art form most beloved of activists and protesters across India, was served a notice.  How do people organise street plays? If tomorrow someone wanted to organise a play on the streets of Hyderabad, would they write to the President of India? Or the CM? And why?

This here is the notice: 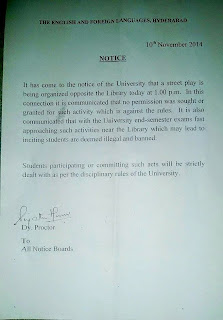 Another notice followed in a few hours' interval: Both the above notices go directly against the UGC guidelines for students' entitlement, which states:
"As democratic citizens, students are entitled to freedom of thought and expression within and outside their institution. The college/ university must allow space for free exchange of ideas and public debate so as to foster a culture of critical reasoning and questioning. College/ university authorities must not impose unreasonable, partisan or arbitrary restrictions on organising seminars, lectures and debates that do not otherwise violate any law."
What law does a street play violate? Held during the lunch hour and getting over in less than ten minutes?
In the meantime concerned faculty members organised an open house where students and faculty repeatedly questioned the role of the university administration in building a more inclusive campus. The call was unambiguous, we are doing our bit, you do yours.  Students pointed out the rules that went directly against the UGC guidelines regarding the students’ right to freedom of expression- and the constitutional guarantees that make us what we are. However, repression continues; while the community fights back.
Movement to reclaim spaces has slowly started. On Tuesday 11th November, students entered the a lawn that was made inaccessible to them years ago, to show their support, their grief and their strength through a poetry reading. 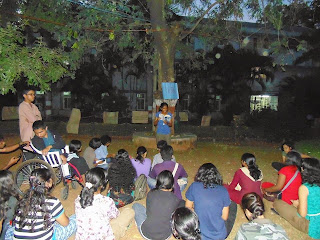 On Wednesday, 12th November, the Teachers’ Association organised a meeting with women’s groups from the city, all of whom expressed solidarity with the community’s attempts to build a more gender sensitive campus.

As of now, a GSCASH (as per the initial demands) has not been constituted. If there are reports to the contrary, then they are lies, because the student representatives on the committee seriously, cannot be the toppers from each class. There has not been students elections that will then send elected representatives to the GSCASH. The administration has not taken up any sensitisation efforts, but has instead ordered for seven more CCTV cameras to monitor the community.  The internal Complaints Committee has not yet been discussed.

If you feel  that the state of affairs at EFLU- Hyd must come to an end, the complainant must get justice- please raise your voice in support. Talk about it on social media (with the hashtags #eflucommunityforgenderjustice, #efluchutzpah), make your newspapers report what we are doing, come and visit us and sign our petitions.

Posted by gender Justice EFLU at 20:55